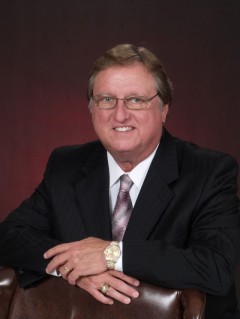 Over 40 years of hands-on experience in the courtroom.  Experience from misdemeanors through capital murder cases.  Unparalleled legal scholarship and skills developed in the heat of battle in trials and appeals.  From traffic court to the United States Supreme Court, Doug Barlow has been there. Get to know him better. 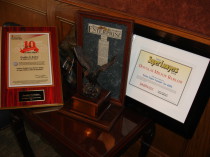 ●National and State Lecturer on criminal law and justice

●Appearances on “Court TV”©, “Larry King Live”© and other media on criminal justice

●Selected to represent all area Criminal Justice Act lawyers in Washington D.C. over past decades

●Awarded an AV rating by Martindale Hubbell, the highest peer review rating a lawyer may attain

Doug Barlow’s accolades began long ago but were signified by his earning his Eagle Scout award as a youth in 1969, a feat both his sons achieved a generation later.  Through college and law school he continued to stand out from the crowd by distinctions such as the dean’s list at both Lamar University and Texas A&M University and representing the University of Houston law student division to the American Bar Association.  At age 26 he opened the doors of his own law firm and built a successful criminal law practice over the ensuing 30+ years.  Having already handled major criminal cases, he obtained Board Certification in Criminal Law by the Texas Board of Legal specialization at the age of 36.  When the Texas Legislature passed laws requiring standards to be set for qualification of lawyers in death penalty cases, Doug Barlow was selected to serve on the committee to establish those standards.  Over the years he has been selected by judges to serve as the Criminal District Attorney Pro Tem in death penalty and other serious felony cases.  He became one of the 1st lawyers in the State to earn board certification as a Criminal Appellate Law specialist.  Doug has been featured as the subject of articles and news stories about his dedication to the criminal justice system.  In 2005/2020, he was named a Super Lawyer© in criminal law by Texas Monthly© magazine, a distinction reserved for the top 5% of the lawyers in the State.  Over the past decades, he was selected by the Federal Judiciary to represent the Eastern Texas lawyers under the Criminal Justice Act in Washington D.C., where he has served on the Legislative and Policy Committee.  In 2005, he became the second lawyer in history to receive the prestigious John H. Hannah, Jr. Award for Public Service, the only award bestowed by the Bar Association of the Eastern District of Texas.  He has the distinction of holding the highest rating of “AV” by the premier peer review firm of Martindale Hubbell; the rating is reserved for those who exemplify the preeminent level of professional excellence as judged by other members of the profession.  Doug has received special recognition for maintaining that achievement for over a decade.  The walls of his office are covered with news articles regarding his representation in major criminal cases in Texas.  While he has received international attention for his case performances, appearing on Court TV©, Larry King Live©, and other national media, Doug Barlow remains accessible to all his clients just as he did when he began his journey as counsel in the criminal justice system over 30 years ago. 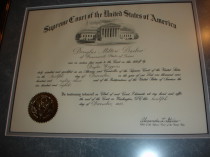 Doctor of Jurisprudence - University of Houston, 1979

30+ year Board Certification in Criminal Law

Certified as qualified lead counsel in death penalty cases under the Tx.Code of Criminal Procedure

Doug Barlow is one of the premier criminal trial and appellate attorneys in Texas. His cases have ranged from truant juveniles to the most serious capital murder cases ever tried before international media. His career began at age 26 and spans over four decades. Doug Barlow graduated from the University of Houston in 1979 with a Doctor of Jurisprudence degree. On the day he was licensed, he opened his own law firm in his home state Texas. Over 40+ years later he has built one of the most successful criminal law practices in Texas. Since that time, Doug has handled over 5,000 cases in the various criminal courts across Texas and elsewhere, with remarkable success. He has been certified as a Criminal Law Specialist by the Texas Board of Legal Specialization for over 30 years and has honed his ability as both a trial and appellate expert. He has tried the most significant jury trials ever facing Texas, including numerous high profile cases involving the death penalty. He has personally argued and won death penalty cases before the Texas Court of Criminal Appeals in Austin. As an appellate expert, he has distinguished himself in post-conviction criminal law litigation in such areas as direct appeal, petitions for discretionary review, writs of habeas corpus, and petitions for writ of certiorari before the United States Supreme Court. His experience includes over 800 appeals before the appellate courts in Texas and elsewhere, with a record number of reported written opinions. While his primary practice is in Texas, his cases haven taken him from Washington D.C, to Denver, Colorado. He is one of the few lawyers in the country to have tried multiple Federal death penalty cases, and has won the only unanimous jury verdict rejecting the death penalty in a Federal death penalty case in East Texas from the Gulf of Mexico to Oklahoma. When the Texas Legislature promulgated laws requiring standards for lawyers who handle capital cases, Doug was selected to serve on the committee with Houston judges to establish qualifications for lawyers in death penalty cases. As a committee member, he organized and gained approval for a local certification course to allow lawyers in Southeast Texas and surrounding counties to meet the standards for certification, and even drafted the qualification test to replace the Harris County test. From Texas to Vail, Colorado, he has been a national and state lecturer on criminal law and justice before audiences including renowned lawyers and judges, and has organized and directed local continuing legal education courses in criminal law for criminal lawyers. In 2005/2020, he was designated as a Super Lawyer by the Texas Monthly magazine, and has received the prestigious John H. Hannah, Jr. Award for Public Service for his years of handling the major criminal cases facing Texas courts.  In 2016, he was selected as the Texas Aggie Distinguished Lawyer by the bar association of Texas A&M University.

Family history in Texas since 1800's

Doug Barlow comes from a family that made Texas home in the 1800's. Doug and his wife Connie have raised their family here, just as Doug’s parents, grandparents, and their parents did. Doug’s large immediate family represented the working class of people who manned the Texasl refineries in the post WW II era. His late father was a United States Marine Veteran who was awarded the Purple Heart on Okinawa and who was one of the first advance Marines ashore to occupy Japan for the formal surrender. His late father-in-law, Joseph C. Stewart, Sr. was a bombardier in WW II in the European Theater, earning the Distinguished Flying Cross for his courageous missions. Doug was married to his high school sweetheart Connie Sue Stewart in 1974 and together they worked for him to complete his undergraduate training at Lamar University and receive a Bachelor of Arts degree from Texas A&M University in 1976. With Connie’s help, he completed his doctorate in law and set up his law practice on the day he received his bar results. His law firm soon flourished and led to the vast experience in criminal law that he accumulated over the next 40+ years. Doug and Connie are proud of their 4 children, each of whom are TAMU college graduates. After raising their children, Connie returned to Lamar University earning her Bachelor of Science in 2003 and beginning her teaching career as a 4th grade teacher at age 50. In their church home, Doug has served as Administrative Board and Staff/Parish Relations committee member, Assistant Cubmaster, Scouting Coordinator, and Scout Building Committee Chairman over the years. Coming from a working class of people, Doug knows the pulse of the community and is in tune with the jurors he encounters in the Texas courtrooms. His extensive immediate family has blossomed for generations in Texas in such areas as golf course development, banking, medicine, law enforcement, photography, farming and ranching, as well as comprising much of the working ranks and management of the Texas petrochemical industry. His extensive roots throughout Texas and his accomplishments have led to his recognition as a leader in the legal community. He serves as a mentor not only to young beginning lawyers, but to seasoned litigators as well.

Doug has been an avid outdoorsman all his life - snowskiing in the Rockies, shark-diving in Tahiti, hiking the Big Bend canyons, and mostly, hunting Texas game from Big Thicket squirrels to Hill Country deer to alligators in Southeast Texas swamps.

8am to 5 pm, Monday - Friday and by appointment

Now you can learn more about Doug Barlow's services and fields of practice online.

See Each Navigation Key to Learn More About Doug Barlow.

BOARD CERTIFIED IN BOTH CRIMINAL LAW AND